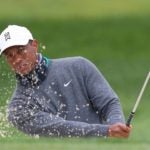 Tiger Woods pictured during a practice round at the 2020 PGA Championship.

The 2020 PGA Championship, the first major of the year, begins Thursday at TPC Harding Park. Here’s everything you need to know to watch the first round.

Previewing the PGA Championship Round 1

The long wait is over, and on Thursday golf fans will finally see major championship golf, albeit not in person. All the game’s biggest stars are in San Francisco for the first chance at major glory in more than a year.

We’ve seen little of Tiger Woods, who remains the reigning Masters champion, since February. Tiger teed it up in just one event since the PGA Tour returned to action, with mixed results. But Woods is confident heading into the PGA and has hopes of capturing his fifth career Wanamaker trophy on Sunday.

Woods will get his tournament started early in the first round, teeing off at 11:33 a.m. ET (8:33 a.m. local time) alongside two players who are among the betting favorites: world No. 1 Justin Thomas and Rory McIlroy. Thomas’ ranking speaks for itself, as does his 2017 PGA victory, while McIlroy will look to turn his game around after some recent struggles.

But until proven otherwise, defending champion Brooks Koepka will be the player to beat, as he attempts an incredible PGA Championship three-peat. Koepka tees off at 11:11 a.m. ET on Thursday, and he’ll play the first round with Shane Lowry and Gary Woodland.

Here’s all the information you need to watch the first round of the 2020 PGA Championship on TV or stream it online.

How to watch the PGA Championship Round 1 on TV

For the first time, ESPN will air the first round of the PGA Championship on TV, and their coverage is extensive. In total, ESPN will offer six hours of opening round TV coverage, from 4-10 p.m. ET on Thursday.

How to watch the PGA Championship Round 1 online

With ESPN covering the late action on TV, ESPN+ will carry early first round coverage online. ESPN+ will air another six hours of traditional tournament coverage, including the opening tee shots, beginning at 10 a.m. ET and running through the day until the TV coverage picks up at 4 p.m. ET.

In addition, you can log into ESPN+ to see Featured Group coverage during the first round of the PGA, which will include one morning group and one afternoon group.

Sign up for an ESPN+ account here to follow all the action all tournament long. The ESPN TV coverage can be streamed on ESPN.com/watch with an active cable subscription. Here’s the complete streaming schedule for Thursday:

As managing producer for GOLF.com, Cunningham edits, writes and publishes stories on GOLF.com, and manages the brand’s e-newsletters, which reach more than 1.4 million subscribers each month. A former two-time intern, he also helps keep GOLF.com humming outside the news-breaking stories and service content provided by our reporters and writers, and works with the tech team in the development of new products and innovative ways to deliver an engaging site to our audience.