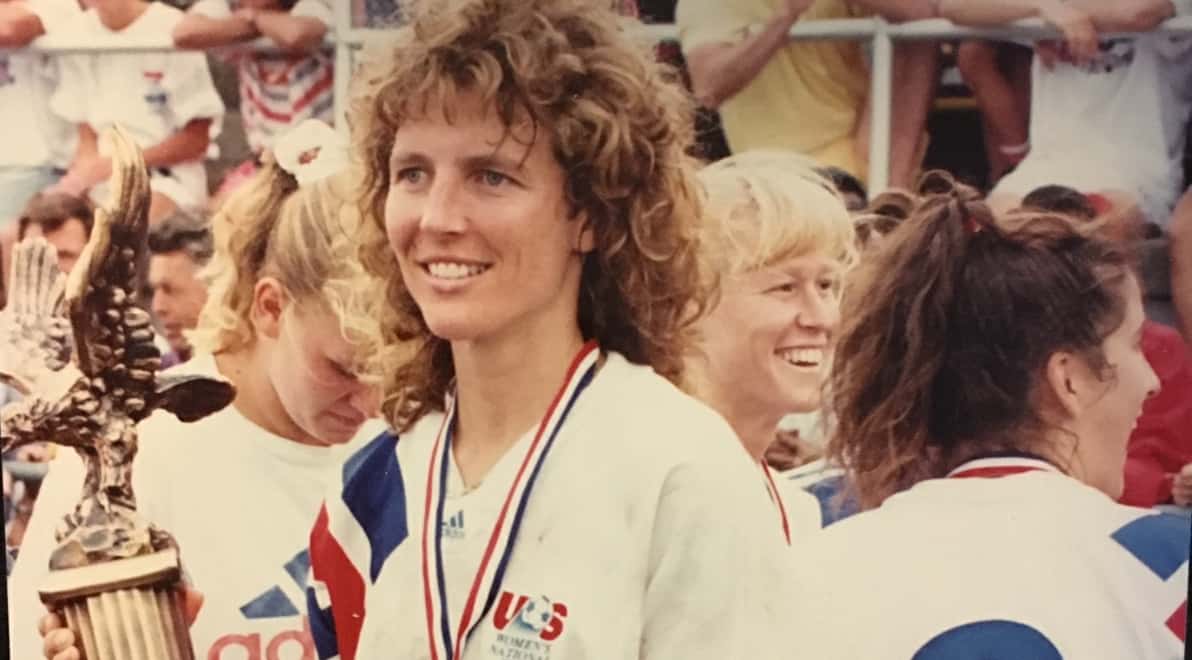 Some 27 years ago on Aug. 8, 1993, the Concacaf women’s championship came to Long Island as the U.S. women’s national team celebrated another title.

Which player scored the winning goal in the Americans’ 1-0 victory over Canada in the championship game of the Concacaf Women’s Championship?

Would you believe none of the above?

That’s right. Defender-midfielder Joy Fawcett, whose achievements sometimes get overshadowed by her talented teammates, scored the lone goal of the match that secured the defending world-champion U.S. its second consecutive title on Aug. 8.

The Americans played most of the match without Anson Dorrance, who was ejected from the game by referee Ramesh Ramdham late in the first half.

The U.S., which needed only a tie to secure the title, won all three of its matches by shutouts at the Town of North Hempstead Park. The Americans began their run with a solid 3-0 win over invitee and runner-up New Zealand, continued it with a 9-0 triumph over Trinidad & Tobago and completed it with a neat 1-0 result over the third-place Canadians before a capacity crowd of 1,637 on Sunday.

How dominating were the Americans?

They finished with more goals — 13 — than shots allowed in the Concacaf tournament — six. For the record, they took 63 shots themselves.

“I am certainly satisfied with the tournament,” Dorrance said. “It stretched us a bit.”

The Canadians, not surprisingly, forced the U.S. to stretch the most. The U.S. outplayed and outshot the visitors, 24-2, as Canada bent but never snapped (the Canadians’ lone shots came off a Geraldine Donnelly free kick that went directly to goalkeeper Kim Wyant in the sixth minute and a cross late in the match).

The U.S.’s most important shot came in the 29th minute when Fawcett knocked home a rebound from a Kristine Lilly shot past goalkeeper Wendy Hawthorne. Lilly fired a hard shot from the top of the area that bounded off a defender to Fawcett, who shot into the upper left corner.

“They’re probably the two most underrated players on the team,” Dorrance said.

On any other team, they would be stars, maybe even superstars.

Lilly, from Wilton, Conn., who captured the 1991 Hermann Trophy as the nation’s best college player, scored 23 goals and set up 19 others last year at North Carolina. She has scored 15 goals in 59 international appearances.

Fawcett? Like Lilly, the Huntington Beach. Calif. native was a member of the world championship team and also was the U.S. Soccer Federation player of the year in 1988. She has scored 14 goals in 55 international appearances.

“We have so many players who can take over a game and be the deciding factor,” Hamm said.

Fawcett and Lilly were not available for interviews because they had planes to catch.

The Americans certainly had their chances to increase the lead. Their best chances, not surprisingly, were by Akers-Stahl, who managed to place a shot on goal with the side of her foot in snarled traffic in front of the net in the 18th minute, and by Gabarra, whose point-blank attempt from the edge of the right side of the goal box was stopped by Hawthorne in the 31st minute.

Two minutes after Gabarra’s near miss, Akers-Stahl and Luce Mongrain battled for the ball near the Canadian penalty area, and Ramdhan called a foul on Akers-Stahl.

Akers-Stahl did not argue the call. “I usually don’t,” she said.

But Dorrance did – from the bench. He shouted to the game official that he should protect his star players more. Akers-Stahl scored a tournament-high 10 goals in the first FIFA Women’s World Cup two years ago, including the game-winner in the championship game against Sweden.

“A player like Mich gets hit every game,” Dorrance said afterwards. “It’s part of my job to protect her. … A player like her should be protected. The game is more attractive when you protect the great players.”

Ramdhan walked over to the bench, and while he never flashed a yellow or red card, ordered Dorrance off the field in the 35th minute. The pro-American crowd booed his dismissal.

“It was dissent,” Dorrance said of what led to his departure. “He was well within his rights to eject me. I have no complaints.”

The U.S. kept pounding away and either Hawthorne came up big — she finished with nine saves — or the hosts, shooting from outside the area, fired wide right, left or over the crossbar.

“You’ve got to credit Canada,” Dorrance said. “They organized well behind the ball and limited our shots in the box.”

The victory was the U.S.’s third in as many matches this year against the Canadians. The Americans defeated their neighbors to the north, 7-0, and then 3-0 in the Ohio Soccer Extravaganza in June.

“Looking at them since Ohio,” they’ve gotten smarter,” Akers-Stahl said. “They’re letting their backs go forward. They were more successful with the ball.”

But not as successful as the U.S.

Here is a related story:

IT HARDLY WAS A FIELD DAY: In 1993, the pitch certainly was not championship caliber