In the past week we’ve reported on dodgy celebrity CBD endorsements purporting to be from the likes of Sir David Attenborough and Eddie Van Halen and read yesterday of Olivia Newton John also highlighting that she has also been targeted.

After a company allegedly attempted to use her name to sell Cannabidiol (better known as CBD oil), the Grease star took to Instagram to urge fans not to buy into the scam.

On Wednesday morning, Olivia’s management wrote: “FRAUD ALERT!!!! It has come to our attention that there is a company online (WomenClothingBeauty.com) falsely promoting and selling a CBD oil they claim is “Olivia Newton-John’s CBD oil.” 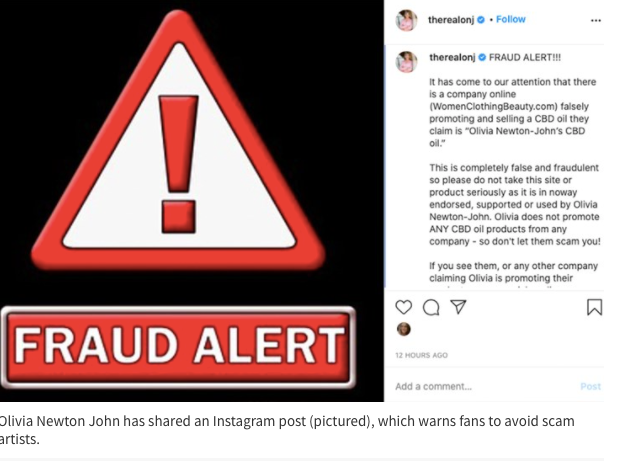 If the the TGA are already asking the industry to police itself and “dob in bad actors” we are in serious trouble.

This on the back of Australia’s Federal Health minister asking the big end of town “medical cannabis” sector to supply him with ideas on how the industry should be developed earlier in the week at the same conference the TGA head just made this statement.

At least leaves us with plenty to write about for the next decade !