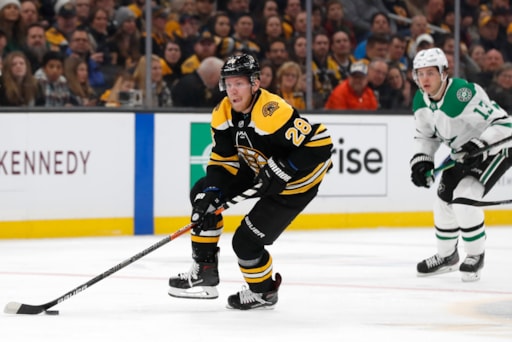 The Bruins are still waiting to get their first in-bubble look at Ondrej Kase.

In the Czech Republic for Phase 2, off the ice for almost all of Phase 3, and a late arrival to the Phase 4 “secure zone” in Toronto, it’s been awfully difficult to get a good look at what the 24-year-old wing can do for the Bruins’ quest for the 2020 Stanley Cup.

But Bruins head coach Bruce Cassidy has liked what he’s seen from Kase, who is expected to suit up for Sunday’s round-robin contest against the Capitals, since returning to practice.

“[Kase] looks good,” Cassidy said after Friday’s practice. “He’s making some plays. He’s got some jump. I think the first three days were tough on him for obvious reasons. Now he’s been at it, probably, I’ll say about a full week here. It seems a little more natural, just with everything he does. He’s got quick hands. My expectation is he’ll have lots of energy.”

The plan, as of right now, is for Kase to line up on the right side of a second line with Jake DeBrusk and David Krejci. That may be complicated a bit if Krejci, who missed Friday’s practice with the vague “unfit to participate” designation, is unable to suit up on Sunday. But the Bruins are committed to Kase working the rust off in his first NHL game in almost five full months.

“He’ll fight the puck a little like all our guys did early on, their first game back because of the speed of the game that is going on around them. You just can’t replicate that,” admitted Cassidy. “I anticipate he’ll get some shots. He’s been doing that in practice. He thinks shot first so we could use some of that right now. We’ll have to watch his minutes, make sure he doesn’t get extended, his shifts early on where he can’t recover [or] put himself in a bad spot. That’s something to keep an eye on. But we need him to play. He’s going to go over the boards when its his turn and hopefully like I said, he can pick it up quick because he’s missed some time. We know that. But he is young. Some of the younger guys get it back quicker.”

But assuming health, it would take one heck of a (terrible) effort for Cassidy to put Kase, acquired from the Ducks in exchange for three assets (including a 2020 first-round pick), back on the shelf after Sunday afternoon.

“We have every intention of using him in Game 1,” Cassidy revealed. “We have to see where he’s at Sunday and hopefully he takes advantage of the minutes he’s given and be ready to go.”

The Czech wing had one assist, nine shots on goal, and was averaging 14:32 per night in his six-game run with the Bruins prior to the COVID-19 pandemic pausing (and eventually canceling) the remainder of the 2019-20 regular season.

Kase last appeared in the Stanley Cup Playoffs in 2018, and has two goals in 13 career playoff games.

Ty Anderson is a writer and columnist for 985TheSportsHub.com. Any opinions expressed do not necessarily reflect those of 98.5 The Sports Hub, Beasley Media Group, or any subsidiaries. Yell at him on Twitter: @_TyAnderson.