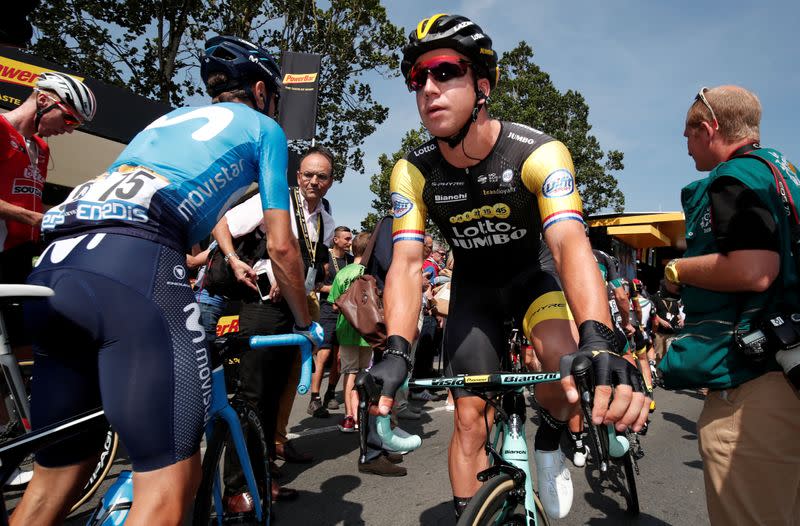 (Reuters) – Dutch cyclist Dylan Groenewegen has apologised for the crash that resulted in compatriot Fabio Jakobsen being placed in a medically induced coma.

Groenewegen, who rides for the Jumbo–Visma team, was jostling for position with Jakobsen in the final metres of the first stage of the Tour of Poland when the pair came together.

Jakobsen, 23, crashed into the barriers and collided with a race official. He was taken to hospital and underwent facial surgery.

“I find it terrible what happened,” Groenewegen said in a team statement. “I can’t find the words to describe how sorry I am for Fabio and the others involved.

“What matters most now is Fabio’s health. I think about him all the time,” the 27-year-old added.

The sport’s governing body, the UCI, had issued a statement strongly condemning the “dangerous behaviour” of Groenewegen, accusing him of causing the crash and disqualifying him from the race.

Jumbo–Visma director Richard Plugge said Groenewegen, who had surgery on a broken collarbone, “feels terrible” about what happened.

“He was deeply affected by it … Soon we will discuss the incident in detail with him.”

The race was meant to be held in July but was postponed due to the COVID-19 pandemic. It was reduced to five stages from the seven originally planned in order to leave room on the calendar for other re-scheduled races.

(Reporting by Arvind Sriram in Bengaluru; Editing by Peter Rutherford)