Reddit is full of useful subreddits for grounding yourself. There are subs for assessing whether you’re actually attractive or not (r/amiugly), to literally get people to roast you (r/roastme) and most recently, to offer constructive criticism on your dating app profile (r/hingeapp).

There are whole other threads for Tinder and Bumble, but – in case you’re not familiar with it already – Hinge is one of the dating apps which requires the most effort for your personal profile. You can’t exist on Hinge with the classic Tinder empty bio (or just a bio which has your Snapchat handle, yeugh), it makes you add a certain number of photos and personalised answers to prompts. The prompts are usually stuff like “I’m looking for” and “My mantra is”, to help people get to know you and spark a convo.

I discovered r/hingeapp from a piece in Vice where the creator of the subreddit, Zach Schleien, explained why he set it up in the first place. Schleien said that asking your friends for help with your dating profile only gets you so far because they’re naturally biased. “With a stranger, you’ll take it with a grain of salt but they’re not going to be biased,” he told Vice. “A stranger can be like, ‘Hey, that photo just is not a good look’ or ‘That fun fact is super boring’.”

That is not what they said to me. I took it upon myself to post my Hinge profile and ask for “any tips” because I’m “not getting any matches” and boyyyy did they rinse me. Here’s what the r/hingeapp Reddit users had to say about my profile (beware, roasting is afoot).

‘You need to smile more’ 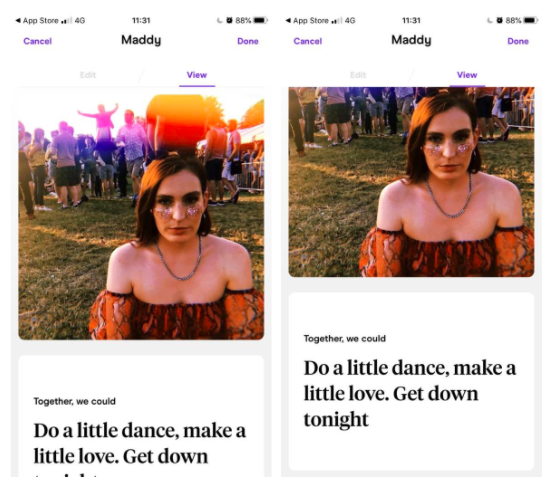 This is my first picture on Hinge, and let me tell you: Reddit users straight up HATED IT. Loathed it. Not a single person responded well to this picture. Comments included: “I think you could smile more in your pictures. I feel that the first picture is too intense. You are at a festival but don’t look like you’re enjoying yourself.”

Another user added “I’m not a fan of your main pic, it’s not very flattering,” and another said: “Your first photo gives me ‘I’m too much of a cool girl to have fun’ vibes, I would ditch it but def keep the other festival one where you actually DO look like you’re having a good time!”

So the current takeaway is that I’m miserable. But what about my fun prompt? “Your prompt makes it seem like you are just looking for fun.” Ok fair, but it is a song, but okay. Taking all this on board. Moving on. 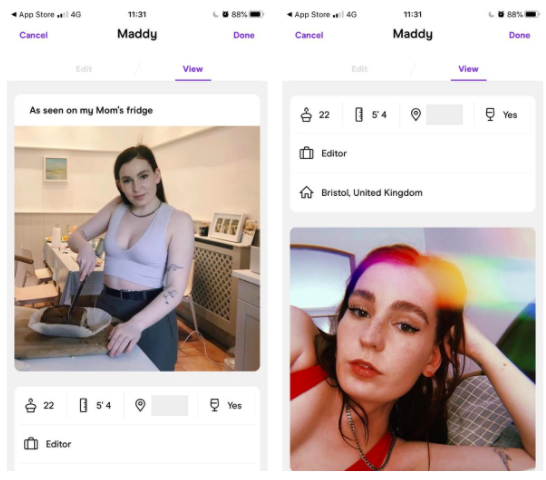 These are my next two pictures, which I thought were the perfect combination of sexy and cute a la Crazy Stupid Love. I was wrong. If I thought r/hingeapp hated the first photo… they despised the second. One user said: “Cake cutting needs to go – a woman with a knife and blank stare in her face is kind of creepy IMO.” I admit I do look a bit Bree Van De Kamp from Desperate Housewives esque here, and potentially murderous, but it was supposed to be wholesome! Ugh. We move.

Another user added: “Cake cutting pic isn’t the most flattering but I do like cake so I wouldn’t count it against you, ha.” Good to know. Others said: “I’m not sure the one of you cutting the cake is the best as well,” and “Personally I don’t like the cake cutting photo” and “Don’t like the cutting bread pic either, it’s odd.” Okay, I get it you hate the cake!!!

Then they got savage, with one user saying: “You look like 2 different people. Half the pictures are pretty attractive, half of them are not. It’s a classic catfish I’d never swipe right.” Ouch.

However, my judge’s panel of r/hingeapp Reddit users DID like the red vest pic. “I would make the red tank top pic your main pic,” one said, with another adding “Red tank top selfie is a winner”. Nice! Finally a win. I am reenergized and moving forwards.

‘You should change all of your prompts’ 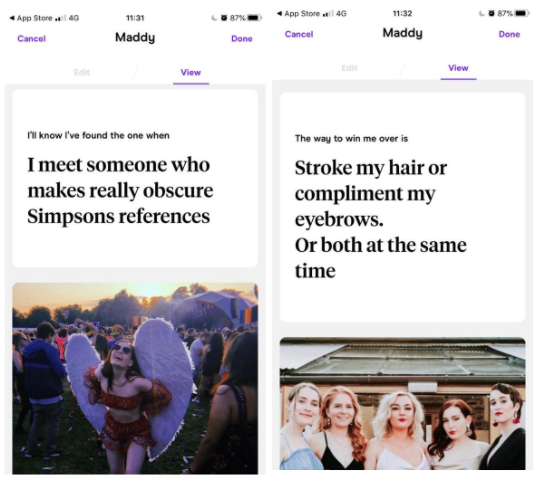 Right, so I thought I was onto a good streak with more positive comments the further we went down my Hinge profile, but then we got to the prompts, and its safe to say the reddit users were… less than impressed.

I have been attacked

They hated all my prompts. Apparently it’s because they didn’t showcase my interests or hobbies enough, but I think that’s because men are bad at starting conversations. Also, The Simpsons is a hobby and my main interest is my own eyebrows, sooo?

The r/hingeapp community did not agree. The eyebrow prompt was “wasteful” and apparently my prompts give off “more of a Tinder vibe than Hinge” which upset me greatly.

But the group pic is where they cut deep.

‘The group pic risks you being upstaged by your friends’ 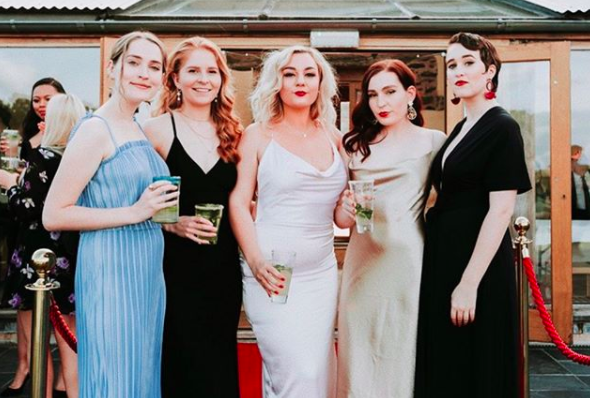 This picture launched a feverish debate in the comments of my Reddit post. The original comment addressing it said: “I would blur out the faces of your friends in the group photo (to make it easier for whoever is looking at your profile to know who you are quickly and to avoid the possibility of being upstaged, looks-wise, by one of your friends).”

I asked this r/hingeapp Reddit user which friend he thinks could upstage me (so I can eliminate them) and also questioned whether blurring my mates faces might look a bit… dodge? Then the comments kicked off into a debate about whether group pics on girls’ profiles were good, a waste of time (working out which one is the profile owner) or risky (your mates being fitter than you stealing the attention). One user suggested I apply a faint blur to my mates in the photo and apply a focus filter on myself. This is a) arduous and I am lazy and can’t be fucked and b) kinda weird? Feel like it would make me look very self-obsessed. Paris Hilton behaviour. But I leave the commenter be, and move on with my research.

‘I see no reason why you wouldn’t get any likes’ 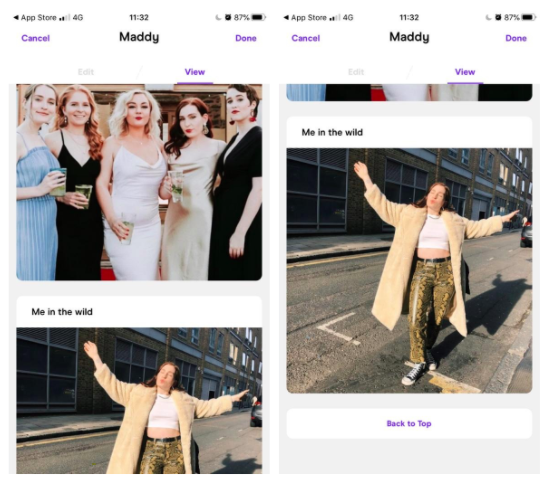 We have reached the end of my profile, and almost the end of my rinsing. The final criticism comes from one user who simply says: “Don’t like the picture of you in the jacket.” Fair.

I let out a breath of relief. Savage, for sure, but not mean or evil. And some of them were actually quite nice! My personal favourite positive comment was when one user said: “Nothing wrong with your profile you look like an average 20something college girl to me. What kind of results are you hoping to get? I see no reason why you wouldn’t get any likes.” and another, after rinsing my first pic, said “I would match you though still. I’m a sucker for pretty women.” Nice! Good to know that even if my profile is absolutely screaming out for help, I have two Reddit users who’d probably swipe right on me. Always nice to have something to fall back on.

I leave this evidence of rinsing and (some) praise for you to evaluate, but honestly, I recommend this process to everyone on Hinge. The people are, as the creator of the subreddit promised, unbiased, honest and forthcoming. The irony is that this exact Hinge profile is what landed me a boyfriend and I haven’t updated it since, so yes I actually am a catfish. Also, I told him about this article, to which he said “Yeah I hated the jacket photo too.”

Related stories recommended by this writer:

• How to get a quarantine boyfriend and maintain him throughout lockdown