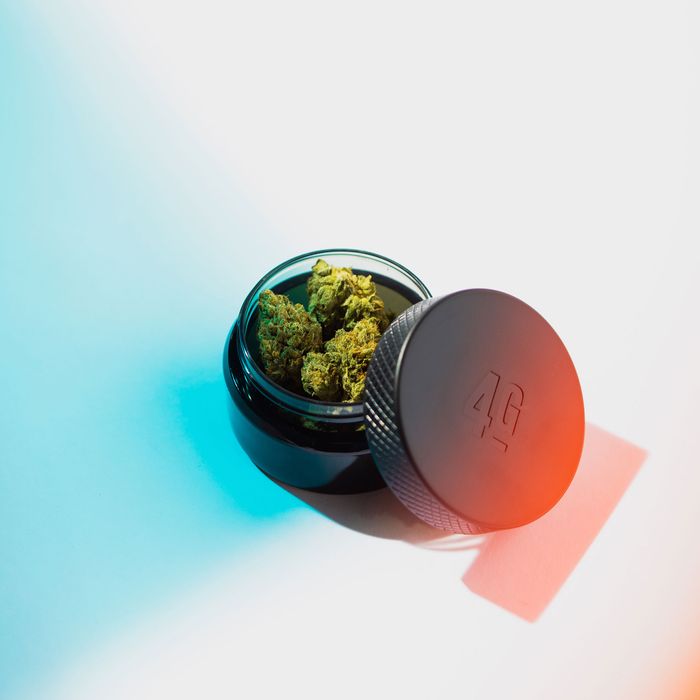 I’m a born-again virgin when it comes to marijuana. I was a rebellious teen when it was on the cusp of legalization in my home state, and its hazy legal status meant my peers and I would sometimes encounter “evil weed” — weed that made you feel so bad, we all concluded it was probably laced with something more sinister.

After one too many of these encounters, I swore off weed completely. It’s a shame, really, because weed is so pretty now. As someone who has smoked out of a potato, my mind was blown on my first visit to an L.A. dispensary: Here were tiny blunts in pastel boxes, long joint holders à la Breakfast at Tiffany’s, and frescoes of THC gummies that smelled like lemonade.

I was tempted, but memories of evil weed stayed my hand. It was only when I had the opportunity to try Jay-Z’s luxe new weed brand, Monogram, that I thought … for journalism?

There was a lot about Monogram that appealed to me: I like fancy things, and this — at $50 a joint — was definitely “luxury” weed. Its packaging was sleek, minimal, and black, so it would match all of my clothes. Furthermore, as “founder and creator” Jay-Z helped develop Monogram himself, meaning this weed was only one degree of separation away from Beyoncé. Surely she’d tried it, and would want me to as well.

I knew my tolerance would be low, so to keep things science-y I enlisted two additional subjects: Jay, my boyfriend and an occasional smoker, and my friend Uddhav, a certified stoner.

With the experimental groups in place, it was time to introduce the variables. Monogram is available in four different strains: 01, 70, 88, and 96. The numbers don’t mean anything, but each promises a distinct flavor profile and experience, from “chill and focus” to “maximum bliss.” Choose your strain based on the intensity of the “sensory experience” you want to have (light, medium, or heavy).

Intrigued by this degree of calibration (in my experience, there is only “high” and “too high”), I was eager to begin. We started with strain No. 96, which came as “The Loosies Preroll” — one of the brand’s three product classes. The loosies are cute little joints, about the size of a pinky finger, packaged in individual glass containers to preserve their freshness. I can imagine they’d be good for sharing, or as stocking stuffers:

The little loosies, good for sharing, and as stocking stuffers.
Photo: Monogram

Upon inhalation, you get a burst of sweet citrus — more tangerine than grapefruit, with a touch of strawberry in the aftertaste. Monogram says this should “precede a heady high that releases your mind,” which is precisely what happened to me a moment later. Shortly after a second hit — marvelously smooth, with a titillating, sherbet sweetness — I flopped back into the couch and became engrossed in Rick Steves’ Europe.

I was out, but my compatriots were still standing, giggling madly at a story I couldn’t follow. Next up was strain No. 1, designed to help you “chill” and “focus.” This came in “Flower” form: spring green buds with a glisten of orange, sticky to the touch, and sealed in a reusable container with a childproof lock:

Monograms “Flower” weed in strain No. 1 to help you “chill and focus.”
Photo: Monogram

At this point, a sober control group (my friend David) joined. While he’s typically a cougher, the smoke went down without a hitch and left him with a “nice strong buzz.” Both Jay and Uddhav reported that Strain No. 1 was “skunkier and danker” than No. 96, with a headier, blackberry-forward flavor. As for the experience, No. 1 was, as promised, very mellow. “It’s wavy, I feel like swaying,” said Uddhav, seesawing in place.

Last up was the “OG Handroll” — the most Jay-Z-esque of Monogram’s products. It’s a giant weed cigar that comes in what looks like a Diorshow mascara tube. It’s also best smoked like a cigar — rather than deep inhales, you sort of kiss it, letting small amounts of smoke in at a time.

The OG Handroll — a $50 weed cigar about as heavy as a baseball bat.
Photo: Monogram

The handroll came in strain No. 88, crafted to “elevate your mind and soul.” A second sober control (my friend Shaun) joined in, and reported that No. 88 smelled “sweet and spicy, with a hint of earthiness” and left him with a distinctly cerebral high. After several hits, Uddhav noted that his vision had become sharper: “more cinematic, like Westworld.” As they passed it around and thick clouds of piquant smoke enveloped me, I somehow understood what he meant.

While not the best weed they’d ever had, all of the testers agreed that Monogram’s products were excellent, and made for an opulent smoking experience that would be worth the occasional splurge. I’d certainly recommend it as a tasteful weed gift for the smoker in your life. As for me, it was a pleasant reintroduction into the world of cannabis, and I wouldn’t mind having a loosie with my Rick Steves once in a while.

Get the Cut newsletter delivered daily


By submitting your email, you agree to our Terms and Privacy Notice and to receive email correspondence from us.