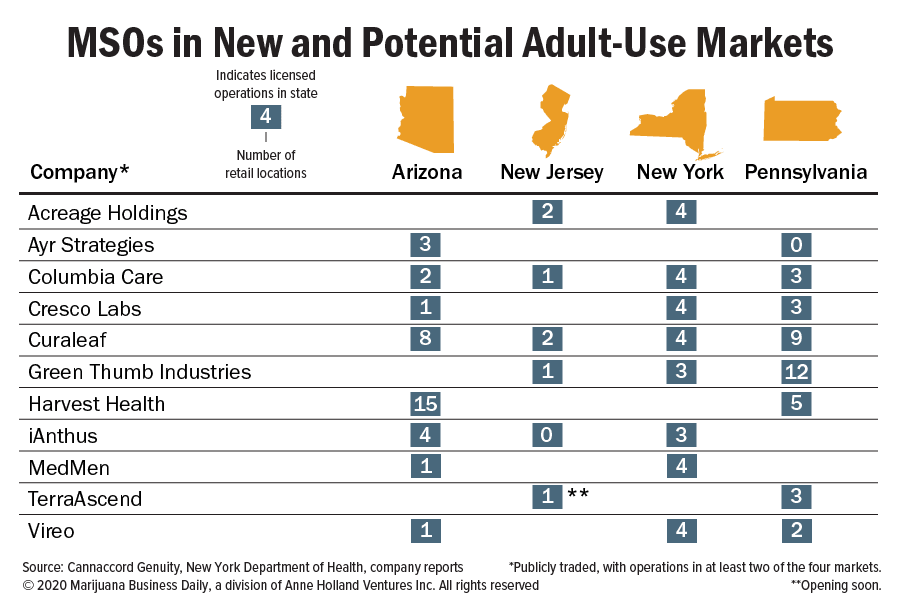 Get insights on cannabis investing and what the post-election investment climate looks like during the Investor Intelligence Conference portion of MJBizCon’s Passholder Days on Thursday, Nov. 12.

Marijuana multistate operators are well-positioned to thrive in adult-use cannabis markets created by the Nov. 3 election, but small businesses – including minority- and women-owned firms – face challenges such as access to capital.

Four publicly traded MSOs are particularly primed to benefit from new and potential adult-use markets in Arizona, New Jersey and Pennsylvania, according to an industry update by Canadian-based investment banking firm Canaccord Genuity.

Voters in Arizona and New Jersey legalized potentially huge adult-use marijuana markets on Election Day while Pennsylvania and New York are strong possibilities to follow suit because of their proximity to New Jersey.

The four MSOs identified by Canaccord Genuity are:

But the situation, Hawkins said, is more complicated and challenging for minority- and women-owned business as well as other small operators that lack the MSOs’ deep pockets and access to capital.

“To me, the biggest challenge leads back to Congress,” Hawkins said. “Until we see banking reform, we’re stuck with the status quo, which just makes it hard for small businesses to operationalize.

“There’s just not a lot of capital out there.”

Capital is needed for small businesses to unlock all the social equity incentives intended to open new markets to minority entrepreneurs, Hawkins noted.

While state regulators might put in place strong social equity provisions in the new markets, they also are expected to fast-track existing medical cannabis operators to launch adult-use markets and generate tax revenues as soon as possible.

While multistate operators generally have deeper pockets, several have faced a severe cash crunch over the past year, causing some to sell desirable assets.

MSOs, even those with cash constraints, have been busy the past couple of years acquiring and expanding operations in states such as Arizona, New Jersey, New York and Pennsylvania in anticipation of adult-use legalization.

The company took out a short-term loan in June at an exorbitant interest rate of 60% and used marijuana business facilities in several states as collateral so it could close a deal to buy an MMJ license in New Jersey.

The flurry of activity has continued:

It’s unclear in most of the new markets how small businesses and women- and minority-owned firms will be treated.

Arizona already is set to issue 26 social equity licenses as part of its adult-use market, but regulators must still determine how to award those licenses.

New Jersey’s proposed legislation earmarks at least 15% of the adult-use licenses for minorities and another 15% for women- and disabled veteran-owned businesses.

But the bill still has a ways to go before being passed, and details haven’t been fully developed on how the licenses will be issued.

Hawkins did see it as a good sign that New Jersey already has started to set up a cannabis commission, with Gov. Phil Murphy selecting a chair – Dianna Houenou – who has a background in social justice issues.

“She will be laser-focused on social justice and equity concerns,” Hawkins predicted.

Such issues also are on the mind of MSO license holders in New York.

Vireo Health weighed in on the issue this week, when the Minnesota-based company announced it had secured an option on land that would enable it to expand its cultivation and processing operation in New York.

Vireo Chief Medical Officer Stephen Dahmer said in a news release: “To support diversity and inclusion, the program should prioritize licenses, job training and scholarships specifically for minority communities that have been disproportionately impacted by the prohibition of cannabis.”

Jeff Smith can be reached at [email protected]