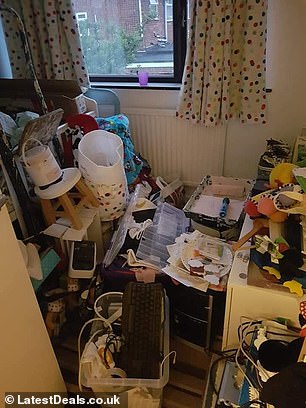 A single mother who has been struggling with her mental health has revealed how decluttering her home has transformed her wellbeing.

Bex Kitchen, 25, from Peterborough, who is currently furloughed, is autistic with anxiety, and suffered from depression for ‘a long time’ before her fiancé left me in January, making her a single mother.

But during lockdown she decided to transform a room in her house that was used as a dumping ground and get rid of all the clutter, spending £170 to create a children’s room which she will use for her future business.

She explained: ‘I think this project has given me something to focus on during lockdown and also improved my mental health….Now that room is done, I feel energised to transform the rest of the house and so relieved too. It’s my favourite room in the house now.’

Bex Kitchen, 25, from Peterborough, who has autism, anxiety and depression, said renovating the room had helped transform her outlook during lockdown (pictured before, left, and after, right)

Bex revealed the inspiration for overhauling her home in a discussion with money-saving community LatestDeals.co.uk.

The single mother said: ‘I just really wanted to create a calm, jungle-themed bedroom. I have a four-year-old and have wanted a second child for a really long time, so I’m considering adopting.

‘However, for now, I’m just about to apply to Ofsted as a childminder after using lockdown to study childcare from home. This room will be where any minded babies I look after take their naps.

‘I’m autistic with anxiety, and I’ve suffered from depression for a long time, so the room ended up being a dumping ground and I didn’t have the energy or executive functioning to deal with it.’

Bex revealed that a tough start to the year had led her to trying to gain control of her life by tidying her home.

She said: ‘I’m coming out of depression, I want to get my life on track, especially as my fiancé left me in January, so I just decided one day it was now or never to take control of my life and that includes making my home somewhere I can truly enjoy and relax in.’

Meanwhile she explained: ‘I was actually really thrifty with this room because I had the laminate already from my previous home, but it had sat in the garage for two years before I finally decided that was it. I needed to lay it or it would never get done!

‘So I only paid out £32.48 on tools and underlay for the floor. The cot was from when my son was a baby, and so were the bedding and curtains.’

Bex who has autism, anxiety and depression explained that she spent lockdown overhauling her home as a way of taking control of her life. Pictured: The room before

‘The handmade clock was made by Emma Steel in Spalding who runs LightArtedly, the watercolour prints were from LauraSladeArt, the canvas map was from The Range and the embroidery hoop was from Rosie Wild at Phoenix and the Cub.’

‘I’m a big believer of supporting small businesses so that’s what I’ve tried to do! ‘

She explained: ‘Overall, if you add up all the furniture, flooring and art it was about £170 that I’ve spent this year on the room.’

The mother-of-one said she completed the decluttering process in small stages and ordered all her supplies online to remain safe during the pandemic. Pictured: The room before

Meanwhile Bex added that she began decluttering weeks ago but finally managed to transform the space this month.

She said: ‘I started decluttering little by little a month ago but most of it I did on one dedicated day this week.

‘I ordered everything online and had it delivered to keep myself safe during the pandemic.

‘It was really easy to order from small businesses online, and even from IKEA for the furniture and Screwfix for the underlay and tools.

Bex explained that she was motivated to transform the roon so that she could use it when she launches her childminder service (Pictured: The room after being transformed)

‘You just have to be patient as some deliveries are taking longer. Luckily I have all the time in the world right now to wait, since we can’t go anywhere!’

Bex said the process of transforming the space helped her mental health during a challenging time.

She continued: ‘Decluttering was the hardest part but I had to be ruthless and throw out 70 per cent of what was in the room.

‘So clearing up even just one room has made a big difference to my mood! Every time I walk past the room I smile.

Tom Church who is the co-founder of LatestDeals.co.uk, added: ‘Programmes like ‘Tidying Up With Marie Kondo’ have become so popular because far too many of us hoard things we don’t need at home.

‘As Bex proves, tidying up and decluttering isn’t just a way to make our homes look great, but has the excellent knock-on effect of making us feel great too!

‘If you find it challenging to begin with, start in small sections – and taking photographs of things before you sell them on ebay or give them to the charity shop may make it easier to part with them, so that you can always look back for sentimental reasons!’