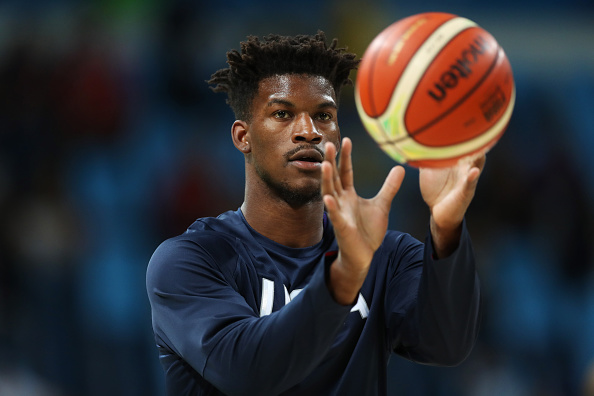 Jimmy Butler put together a masterpiece performance leading the Miami Heat to a crucial 115-104 game three victory over the Los Angeles Lakers in the 2020 NBA Finals. Butler became just the 21st player in NBA Finals history to record a triple-double. He scored 40 points, adding 13 assists, 11 rebounds, two steals, and two blocks in 45 minutes of action.

With this victory, the Heat earned its first victory of the series, now trailing two games to one. Of course, a humongous victory as no team has ever come back from a 3-0 series deficit.

While Goran Dragic and Bam Adebayo remained sidelined for the second-consecutive game, the Heat showed lots of early life.

Miami got out to a 13 point lead by the midway point of the first frame. Undoubtedly, the Lakers struggled early on with Miami’s zone defense. The Heat forced 10 turnovers in the first quarter, the most turnovers in any quarter for Los Angeles this entire season.

The Heat capitalized with 11 points off turnovers, eight of which came at the hands of LeBron James and Anthony Davis. Notably, Davis was held scoreless and rebound-less after seeing his first eight minutes of action.

Midway through the first, the Lakers began taking care of the basketball and knocking down triples. Kyle Kuzma hit the Lakers’ first three-pointer and added one more in the final two minutes of the opening quarter.

Los Angeles erased most of Miami’s 13-point lead and only trailed by three points, 26-23, at the end of the first.

Davis scored his first points of the night at the 8:46 mark of the second quarter with a corner triple but struggled with foul trouble. He took only two shots, scored five points, and was held to just one rebound.

Butler was terrific in the first half, boosting Miami to a 58-54 lead, the first lead at the half for the Heat in these finals. Butler scored 19 points on 8-for-12 shooting and added six rebounds, six assists, and two steals. Herro was held to 1-for-8 shooting and just four points, while James scored 16 points for Los Angeles, adding six rebounds and six assists.

Duncan Robinson opened up the third-quarter scoring with a long three-pointer, his 10th points of the contest. Davis picked up his fourth foul with 10:15 in the third after coming across a screen too strong.

Tyler Herro knocked down another Heat triple, boosting Miami to a 10-0 run to kick off the second half. Los Angeles was held scoreless through the first four minutes of the second half before Kentavious Caldwell-Pope‘s three-pointer.

Los Angeles responded with its own 8-0 run. Both clubs continued to trade runs in the third quarter while the game remained physical in nature. With 21 seconds left in the third quarter, Butler knocked down his 29th and 30th points on free throws after taking an unusually hard fall on his attempted layup. James responded with a quick layup leaving Los Angeles down 80-85 entering the final frame.

Butler sat for the first minute of the fourth quarter before James cut the lead to two points. Following a pair of corner three’s from Markieff Morris and a Rondo layup, Los Angeles took its first lead of the game with 8:54 left to play. James assisted on all three of these buckets.

Butler deserves the MVP of game three, although Kelly Olynyk provided the Heat a huge boost off the bench. Olynyk scored 17 points, knocking down three of his five three-pointers. And despite below-average shooting nights from Robinson and Herro, the pair combined for 30 points.

For Los Angeles, James ended with 25 points, 10 rebounds, and eight assists. Davis remained quiet with just 15 points and five rebounds. Morris and Kuzma combined for 38 points off the Lakers bench.