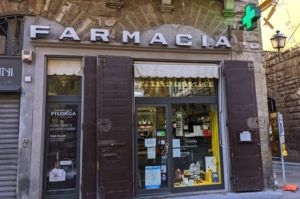 A pharmacy in Florence, Italy. (Photo by Alfredo Pascual)

Italian regulators have reminded pharmacies they are barred from shipping medical cannabis preparations to customers, a major departure from how patients have accessed the medicine for years in the southern European country.

Business and patient groups warn that a government crackdown on such shipments – based on a 30-year-old law – could turn back the clock on the nation’s burgeoning medical cannabis industry.

A significant portion of the cannabis dispensed by pharmacies is thought to be shipped to patients – as opposed to in-store purchases.

The government signaled its intention to enforce the law in a recent document from the Medical Devices and Pharmaceutical Service of the Italian Ministry of Health.

Italy is the second-largest European market in terms of cannabis flower and full-spectrum extracts.

Restrictive regulations governing how patients can legally access medical marijuana is one of the biggest challenges facing international medical markets.

This often leads to only a fraction of the patients who could benefit from a cannabis-based therapy actually having access to the medicine – and that means fewer business opportunities in the sector.

In Italy, most pharmacies do not dispense medical cannabis because of the specialization and technology required.

Shipping cannabis magistral preparations to patients has been common practice in Italy for years, particularly during the coronavirus pandemic.

But this practice is likely to stop after the Ministry of Health signaled its intention to apply a law from 1990 that requires narcotic drugs be dispensed in the pharmacy directly to the patient or their representative.

Andrea Ferrari, consultant for the Italian think tank THC Lab, told Marijuana Business Daily that a likely explanation for why authorities are now enforcing this rule is that “they may want to encourage a more decentralized distribution network, where pharmacists serve patients in their neighborhoods, and avoid that a few specialized pharmacies in the country concentrate most sales by shipping all across Italy.”

But in order for Italy’s plan to work, “authorities should also make it more attractive for more pharmacies to join the so far relatively small number of those that dispense cannabis,” Ferrari said.

In an open letter this week, a group of pharmacists, patients and doctors appealed to authorities to reconsider their position.

“Many of us are far from pharmacies (which dispense medical cannabis) and do not have the possibility to physically travel (to the pharmacy) first to bring the prescription and then to collect the product,” the letter noted.

Carlo Privitera, a signatory to the letter and a physician who specializes in medical cannabis, confirmed to MJBizDaily the letter was sent to the health minister on Oct. 21.

Other nonprofit organizations previously sent a letter to the minister expressing concern over the ministry’s apparent skepticism of “the current system of prescription, implementation and distribution (of medical marijuana) that our country had built with so much effort with great difficulty.”

Separately, the Italian Minister of Health published a decree this month that added ingestible formulas with flower-derived CBD to a table of medicines in its narcotics law.

The decree includes “compositions for oral administration of cannabidiol (CBD) obtained from cannabis extracts” in Section B of the narcotic law’s table of medicines – next to, for instance, barbiturate-type medications that require a strict level of control.

The move was apparently done to pave the way for the authorization of sales of GW Pharmaceuticals’ plant-derived CBD drug Epidiolex.

It remains unknown whether the Italian public health system will cover the cost of the drug.

Once Epidiolex becomes available in Italy, doctors will be able to prescribe it using only “non-repeatable” prescriptions because of its classification in the narcotic’s law.

This means patients will not be able to use a single prescription multiple times, as is possible with medicines in Section E of the narcotic law, which includes compositions with benzodiazepines such as clonazepam, diazepam and lorazepam.

Some local experts believe the classification of CBD oral preparations in the narcotic law’s table of medicines could also affect how CBD magistral preparations are prescribed by doctors and handled and dispensed in pharmacies.

Because preparations of plant-derived CBD for oral consumption are now classified as a narcotic, they require more controls than those manufactured with synthetic CBD.

This means pharmacies could have an incentive to buy synthetically produced CBD over plant-derived medicines.

In all cases, the CBD active substance bought by pharmacies to dispense magistral preparations must come from a limited selection of Good Manufacturing Practice-certified facilities.