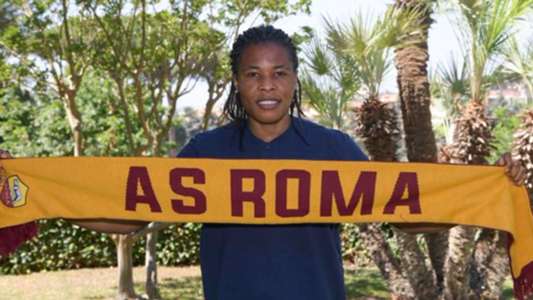 Osinachi Ohale has revealed that AS Roma’s Women’s Champions League ambitions convinced her to sign for the Italian outfit.

Roma finished fourth with 34 points from 16 games to end one-point adrift of the Champions League spot before the coronavirus cancellation of the Serie A women’s top flight last season.

The Nigerian, who had made 15 appearances and scored twice for CD Tacon, now known as Real Madrid, in Spain, was signed to beef up Betty Bavagnoli’s squad for their new season.

While opening up on what attracted her to moving to Rome, the Super Falcons defender shared her ambition is to help her new Italian side to an improved outing next season.

“I decided to choose Roma because of so many things,” Ohale told the club website. “So many amazing things about the club, about this city and this country that interested me.

“So I felt like it would be a great thing for me, to explore and to experience new things and a new challenge.

Before joining David Aznar’s side last summer, Ohale had enjoyed professional stints with Houston Dash in the United States and later starred for Vittsjo and Vaxjo before moving to Spain.

The 28-year-old, who boasts of three Women’s World Cup outings and four Africa Women’s Cup of Nations titles with Nigeria, is unmoved by the competition as she is keen to excel in Rome.

“My first impression of my teammates well, I saw them and I was like, ‘This is a family,'” Ohale said. “They are so welcoming. They are all easy to get on with and so cheerful. Everyone is talking to everyone, everyone is interacting with everyone. So I see a very big team, a family.

“The sort of defender I am, I would say I am very, very strong. I’m very, very fast, I’m good at reading the game and I’m also very good at physical battles too. There’s so much more I could mention!

AS Roma continue their preparation for the new season after Wednesday’s morale-boosting 4-0 win over fellow Serie A side Florentia Sangimignano.