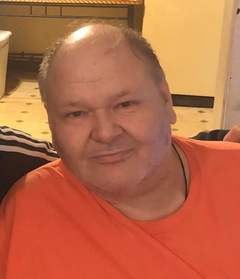 
Richard Laverne Barber, 66, of Ottumwa passed away peacefully on Aug 1, 2020 at Mercy Hospital in Des Moines with his daughters at his side.
Born on July 28, 1954 in Centerville IA to Vance and Margaret Barber, Richard was the oldest of 3 boys. He attended Centerville High School, graduating in 1972. He later graduated from Indian Hills Community College with a degree in Computer Programming. On July 28, 1974 he united in marriage to Sandra (Crafton) Regnold. They later divorced but remained good friends until the end.
Richard had a few different jobs in Centerville growing up including his family’s restaurant, McGraw – Edison, among others. In 1977, he went to work for Everco Industries. He stayed with them through their transition to Moog Automotive and left in 1997 after they changed to Cooper Industries. Richard went to Autozone in 1997 until around 2010. He loved working on cars and spent many hours doing so. He also enjoyed spending time with his family and loved his grand fur baby, Oscar.
Richard leaves behind his mother, Margaret Barber, of Knoxville IA. His two daughters, Michelle (Jesus) Alanis of Harrison AR and Christina Barber of Ottumwa. His pride and joy, his grandchildren, Devin and Noe’ Colin Alanis of Harrison AR. His brothers Dennis (Doreen) Barber of Mitchellville IA and Gary (Janette) Barber of Centerville IA. Nieces and nephews, Dawn Barber and her children Dakkota and Delilah of Mitchellville, Danielle Barber of Des Moines, Micki (Zig) Kauzlarich of Omaha NE and their children Brogan, Buddy (Krista) and Chase, Tina (Scott) Talbot of Indianola IA and their children Alix and Kegan, Angie (Rob) Talbot of Centerville IA and their children Jordon and Haven and Jordon’s daughter Jayde, as well as a host of Aunts, Uncles, Cousins and friends that meant a lot to him.
He is preceded in death by his father, Vance, grandparents, Henry and Bernis Barber and Harold and O’Leta Davis, plus other family whom he loved.
A Celebration of Life will be held on Sat Aug 8, 2020 from 3-7 pm at Memorial Park in Ottumwa IA. Masks are recommended but not required. There is plenty of space available for social distancing.
In lieu of flowers, memorials may be made to St. Jude Hospital or to the family. Services entrusted with Sinnott Funeral Home in Ottumwa.