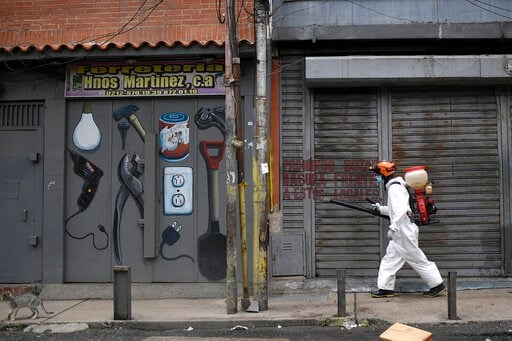 By The
Associated Press

LONDON — The number of British companies planning to cut staff numbers in June was five times higher than in the same month a year earlier, in an ominous sign of COVID-19’s economic impact.

Figures obtained by the BBC show that 1,778 companies informed the government of plans to cut a total of 139,000 jobs. A year earlier the figure was 345 companies announcing a total of 24,000 job losses.

Businesses are required to inform the Insolvency Service if they plan to cut 20 or more jobs.

During the pandemic the government has been paying the salaries of almost 10 million furloughed workers. Economists are predicting a surge in unemployment when that program ends in October.

The U.K. economy shrank by more than 20% in the first half of 2020, and despite some signs of recovery the Bank of England says the economy will end 2020 9.5% smaller than it started the year.

HERE’S WHAT YOU NEED TO KNOW ABOUT THE VIRUS OUTBREAK:

— The glamorous French Riviera resort of Saint-Tropez is now requiring face masks outdoors. The move, which began Saturday, threatens to sober the mood in a place renowned for high-end, free-wheeling summer beach parties.

— One Spanish town as turned to deploying special police units whose job it is to enforce health regulations meant to check a surge in the coronavirus.

HERE’S WHAT ELSE IS HAPPENING:

Most pupils have been out of the classroom since the U.K. went into lockdown in March, though some primary-age children have returned.

Britain’s official death toll from the coronavirus is more than 46,500, the highest in Europe.

Scientists say the U.K. may have reached the limit of how much it can relax lockdown restrictions without causing a new surge in coronavirus infections. They say some things may have to close — even the country’s beloved pubs — so that schools can reopen fully.

Most U.K. schools start the new term in early September, but those in Scotland begin to reopen this week.

NEW DELHI — The Indian Medical Association says 196 doctors have died of COVID-19 so far and, in an open letter to Prime Minister Narendra Modi, requested adequate care for physicians and their families.

India has been posting an average of around 50,000 new cases a day since mid-June and has the third-highest caseload in the world after the United States and Brazil. It has the fifth-most deaths but its fatality rate of about 2% is far lower than the top two hardest-hit countries.

Even as India has maintained comparatively low mortality rates, the disease has spread widely across the country.

MELBOURNE, Australia — The premier of Australia’s Victoria state says more than 2,700 active cases have no known source and remain the primary concern of health authorities.

Victoria on Sunday saw a welcome drop in its new COVID-19 cases with 394 but a record 17 deaths, including two people in their 50s. It took the hard-hit state’s toll to 210 and the Australian total of deaths to 295.

The city of Melbourne has been under tough restrictions since a week ago, including an overnight curfew and mandatory wearing of masks, but won’t see the results of their efforts for another one to two weeks.

Almost 270 Victorian residents have been fined over the past 24 hours for breaching the restrictions, including a man helping a friend to move a television 27 kilometers (17 miles) across the city.

Victoria Police issued 268 fines to individuals in the past 24 hours, including 77 for curfew breaches and 38 for failing to wear a mask when leaving home.

RIO DE JANEIRO — Brazil has surpassed a grim milestone — 100,000 deaths from COVID-19. And five months after the first reported case, the country is showing no signs of crushing the disease.

The nation of 210 million people has been reporting an average of more than 1,000 daily deaths from the pandemic since late May, and 905 were recorded in the latest 24-hour period to put Brazil above 100,000. The Health Ministry also said there have been been a total of 3,012,412 confirmed infections.

The totals are second only to the United States. And experts believe both numbers are severe undercounts due to insufficient testing.

FRANKFORT, Ky. — Kentucky is reporting an increase of 801 cases of COVID-19, including 29 cases in children age 5 or younger.

In a news release, Kentucky Gov. Andy Beshear said the state had a total of 34,578 cases of the illness caused by the new coronavirus and 772 deaths, including an incease of eight fatalities reported Saturday. Beshear says Saturday was a tough day the state’s fight against COVID-19.

Trump accused Democrats of loading up their rescue bill with priorities unrelated to the coronavirus. “We’ve had it,” he said Saturday at a news conference at his country club in Bedminster, New Jersey.

Trump said the payroll tax cut would apply to those earning less than $100,000 a year. He said that if he is reelected in November, he would look at the possibility of making the payroll tax permanent.

Extra aid for the unemployed will total $400 a week, a cut from the $600 that just expired.

The health ministry says the country with the world’s fifth-largest caseload now has 553,188 cases and 10,210 deaths.

South Africa makes up more than half the infections on the African continent, where the total number of cases this past week surpassed 1 million. Experts say the actual number of cases is several times that amount, given the shortage of testing materials and people can have the virus without symptoms.

The figures from the Department of Health Services increased the state’s total confirmed COVID-19 cases to nearly 186,000 and the reported death toll to 4,137. The number of infections is thought to be far higher because many people have not been tested, and studies suggest people can be infected without feeling sick.

The hospitalizations for coronavirus and use of intensive care beds and ventilators have been declining since mid-July.

Copyright 2020 The Associated Press. All rights reserved. This material may not be published, broadcast, rewritten or redistributed without permission.