Walmart will debut outdoor movie screenings at 160 of its store parking lots, creating drive-in movie theater pop-up venues in collaboration with the Tribeca Film Festival beginning on Aug. 14 and ending on Oct. 21. 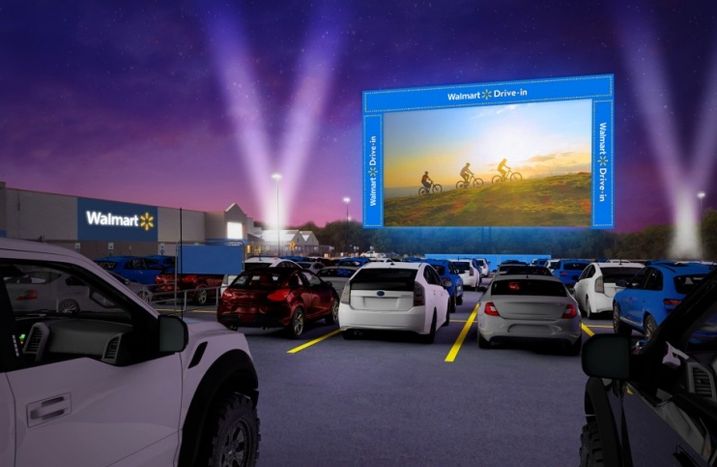 The retail giant isn’t charging admission to the screenings, though it is selling movie-oriented concessions via pickup or delivery. The store parking lots will be configured so that cars are spaced out, and patrons who get out of their cars will be required to wear masks.

The screening roster will include crowd-pleasing movies of recent vintage, such as Pokémon Detective Pikachu, Black Panther, Spider-Man: Into The Spider-Verse and Wonder Woman, along with older favorites, such as E.T., Ghostbusters, Back to the Future and The Wizard of Oz. The screenings will also include pre-feature shorts.

The company said actor Drew Barrymore will be a screening virtual host, and she will also make a surprise in-person appearance at one location. Moviegoers will also experience unannounced virtual or in-person appearances by celebrities including Peter Berg, Jennifer Garner, LeBron James and Chrissy Metz.

Moviegoers are required to reserve their spots online. Walmart opened up reservations on Wednesday afternoon, and by Thursday afternoon, virtually all of the showings were booked, hinting at the enormous appeal of outdoor movie screenings during the pandemic summer of 2020.

Drive-in movies have thus experienced a renaissance, with reports of pop-ups all over the country, as well as strong attendance at the few legacy drive-ins still in existence before the coronavirus pandemic.

As of October 2019, there were 305 permanent drive-ins in the U.S., according to the United Drive-In Theatres Association, with 549 screens, a total that doesn’t track pop-ups. That number represents a slow but steady diminution of the industry since the 20th century, with 443 locations nationwide (684 screens) in the summer of 2000, and more than 4,000 locations during the heyday of the business in the late 1950s.

“Drive-in movies have been enormously popular this summer, with near sell-outs every weekend,” Studio C spokesperson Emily Loeks told M Live. “Our community is hungry for opportunities to gather in a safe way.”

A few companies have pivoted into the pop-up drive-in business. Kilburn Media, which specializes in live events, realized the pandemic would mean a change for the company, and so started organizing pop-up drive-ins almost immediately.

Kilburn Live formed a partnership with the Dallas Cowboys and opened a pop-up drive-in theater in June at the 91-acre The Star complex, which includes the Dallas Cowboys’ world HQ and practice facility in Frisco, Texas.

Other pop-ups are being held by movie theater owners. In August, a pop-up drive-in is being held at the parking lot of the Harkins Theatre at Chandler Fashion Center mall in Chandler, Arizona, with tickets at $35 per vehicle. All of the tickets sold out almost immediately, ABC 15 reports.

In Grand Rapids and Lansing, Michigan, Celebration Cinema has organized pop-up drive-ins at its parking lots, with tickets at $30 per car. As of Thursday evening, the company reported that all the tickets were “nearly sold out.”