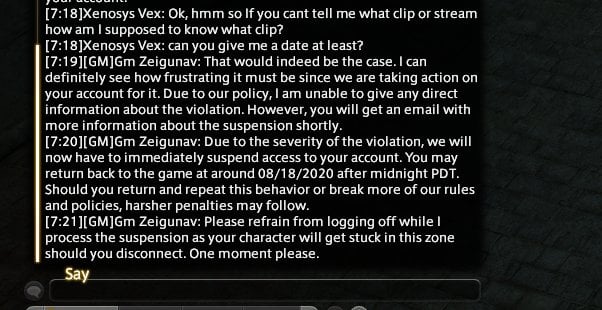 I’ve complained about this a lot. The lack of decay for strikes is probably one of the silliest things about this game’s moderation. I got one strike and a day-long suspension back in 2016 for telling some dude he was acting like a piece of shit to a new healer running a8n back in the day. That was over half of the game’s lifespan ago and so far as I know I’m still considered on thin ice for it.

This annoys the shit out of me too. I remember when the house reselling drama crescendoed we were getting posts every other day of GMs giving different answers about if it was bannable or not. Also about whether or not forum bans are considered when giving ingame bans.

Temp bans like Xenosys got often get rolled into permabans before they end, essentially self-escalating.

This is a problem on the forums as well. People complain about the moderation here a lot, but I got a two week ban from the OF for replying to a post that said “If you don’t have the money to buy leve turnins you shouldn’t bother getting into crafting at all” with “lol that’s stupid and patronizing.”

That two week ban, which was the first time I ever got in trouble with SE at all, got upgraded to a permaban in three days. I’m still banned today, as a matter of fact.

PF constantly has people selling runs for real money via Discord, which the GMs say they can’t follow up, yet they can watch Twitch streams and check Reddit (RIP that guy on TalesfromDF)

This actually kinda infuriates me. It’s incredibly two-faced to say you don’t accept external evidence for shit that matters but then stalk players twitters, twitch streams and social media to ban them in-game over something petty. Why is my subscription fee paying for you if you’re just gonna tell me to fuck off when a dude is stalking my girlfriend because external screenshots and logs aren’t allowed when you can use them just fine to ban some random twitch streamer or Joe Schmoe for swearing on the internet?